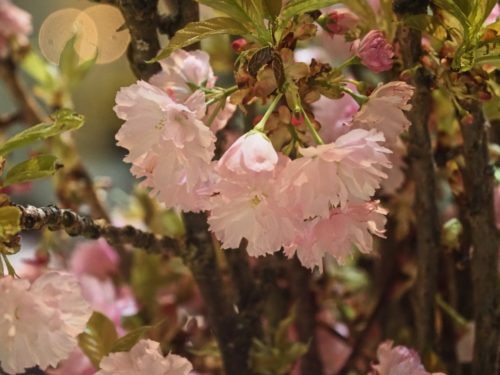 East­er is the most sig­nif­i­cant holy day for Christianity’s many denom­i­na­tions, although not all of them are cel­e­brat­ing it today. Pas­sages like the fol­low­ing excerpt from the Gospel of Luke (24:1–12) are com­mon­ly read dur­ing East­er ser­vices and litur­gies as part of Chris­t­ian com­mu­ni­ties’ obser­vance of the hol­i­day, as they are con­sid­ered author­i­ta­tive accounts of the East­er sto­ry by Christians.

At day­break on the first day of the week
the women who had come from Galilee with Jesus
took the spices they had prepared
and went to the tomb.
They found the stone rolled away from the tomb;
but when they entered,
they did not find the body of the Lord Jesus.
While they were puz­zling over this, behold,
two men in daz­zling gar­ments appeared to them.
They were ter­ri­fied and bowed their faces to the ground.
They said to them,
“Why do you seek the liv­ing one among the dead?
He is not here, but he has been raised.
Remem­ber what he said to you while he was still in Galilee,
that the Son of Man must be hand­ed over to sinners
and be cru­ci­fied, and rise on the third day.”
And they remem­bered his words.
Then they returned from the tomb
and announced all these things to the eleven
and to all the others.
The women were Mary Mag­da­lene, Joan­na, and Mary the moth­er of James;
the oth­ers who accom­pa­nied them also told this to the apostles,
but their sto­ry seemed like nonsense
and they did not believe them.
But Peter got up and ran to the tomb,
bent down, and saw the bur­ial cloths alone;
then he went home amazed at what had happened.