At the 2019 Acad­e­my Awards last month, the award for Best Doc­u­men­tary Short Sub­ject went to “Peri­od. End of Sen­tence.” The twen­ty-six minute film takes place in the Haipur Dis­trict of India, about six­ty kilo­me­ters out­side of New Delhi.

Direct­ed by Ray­ka Zehtabchi and pro­duced by Melis­sa Berton, the film starts by high­light­ing how many peo­ple, both men and women, don’t real­ly under­stand men­stru­a­tion. They don’t know what it means or what caus­es it, and peo­ple are hes­i­tant to talk about it. Girls and women use what­ev­er spare cloth they can find to absorb their peri­ods, which is not always san­i­tary or safe.

“Men­stru­a­tion is the biggest taboo in my coun­try,” says Arunacha­lam Muru­ganan­tham. He invent­ed low-cost machin­ery to make san­i­tary nap­kins, com­mon­ly referred to as pads. His goal is for one hun­dred per­cent of women to be using pads in India. Cur­rent­ly, less than ten per­cent do. Many women haven’t heard of or seen pads before, and don’t know how to use them.

Some of the women in the com­mu­ni­ty learn how to make the pads, and work 9 AM to 5 PM every day to make and pack­age them.

Their next task is to sell them. Some of the women go to shops to try to get them sold there, but the shop­keep­ers are all men and don’t seem interested.

Some of the women go out meet­ing women in their homes or in small groups, show­ing them their pads com­pared to some of the name brand ones. 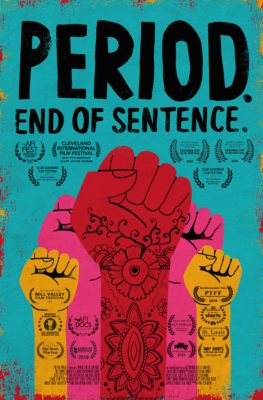 The pad the women make, which they have named “Fly,” is bulky but very absorbent. The oth­er pads look sleek­er and nice, but don’t absorb much and leak. The women from Fly tell the lis­ten­ing women that their pad may be ugly, but it works well, like an unat­trac­tive man who works hard and makes a good hus­band, elic­it­ing laugh­ter from the group of women.

The women are suc­cess­ful in sell­ing the pads in groups like this and door to door, though it takes time.

Many women don’t like to buy pads from the store, find­ing it embar­rass­ing with men run­ning the stores and many men hang­ing around at or near the stores.

Some of the mon­ey earned from the sales of the pad will go to buy­ing mate­ri­als for the next round of pro­duc­tion, with the rest going to the wom­en’s pay.

One woman who works mak­ing the pads says that her hus­band now respects her more, since she is work­ing and earn­ing money.

The woman who work at Fly have been empow­ered by the project, and some share their dreams for the future.

Says Muru­ganan­tham, the inven­tor of the machines: “The strongest cre­ation cre­at­ed by God in the world: not the lion, not ele­phant, not the tiger. The girl.”

The start-up funds to buy the machines and first round of sup­plies need­ed for man­u­fac­ture came from the Oak­wood School in Los Ange­les, and now The Pad Project con­tin­ues the work in addi­tion­al com­mu­ni­ties, with dona­tions through their web­site.

This film is short, humor­ous, edu­ca­tion­al, and inspi­ra­tional. Every­one should watch it when they have a few min­utes, and maybe make a con­tri­bu­tion to the project to get machines installed in more com­mu­ni­ties, giv­ing more women pay­ing jobs and even more access to afford­able, local­ly-made, fem­i­nine hygiene products.

“Peri­od. End of Sen­tence” is cur­rent­ly avail­able to screen on Net­flix.