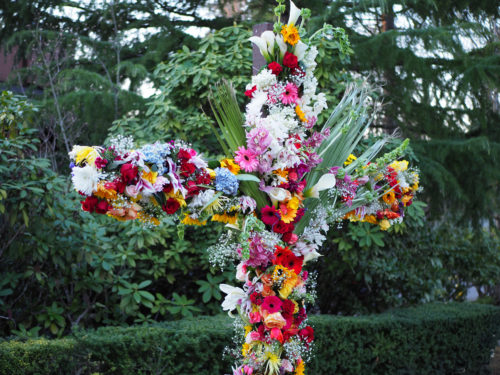 East­er is the most sig­nif­i­cant holy day for Chris­tian­i­ty’s many denom­i­na­tions, although not all of them are cel­e­brat­ing it today. Pas­sages like the fol­low­ing excerpt from the Gospel of Mark (16:1–7) are com­mon­ly read dur­ing East­er ser­vices and litur­gies as part of Chris­t­ian com­mu­ni­ties’ obser­vance of the hol­i­day, as they are con­sid­ered author­i­ta­tive accounts of the East­er sto­ry by Christians.

When the sab­bath was over,
Mary Mag­da­lene, Mary, the moth­er of James, and Salome
bought spices so that they might go and anoint him.
Very ear­ly when the sun had risen,
on the first day of the week, they came to the tomb.
They were say­ing to one another,
“Who will roll back the stone for us
from the entrance to the tomb?”
When they looked up,
they saw that the stone had been rolled back;
it was very large.
On enter­ing the tomb they saw a young man
sit­ting on the right side, clothed in a white robe,
and they were utter­ly amazed.
He said to them, “Do not be amazed!
You seek Jesus of Nazareth, the crucified.
He has been raised; he is not here.
Behold the place where they laid him.
But go and tell his dis­ci­ples and Peter,
‘He is going before you to Galilee;
there you will see him, as he told you.’ ”

Read­ers inter­est­ed in Res­ur­rec­tion-themed reflec­tions may want to read this year’s East­er homi­ly from Michael G. Ryan. Father Ryan has been the pas­tor of St. James (the Cathe­dral Church of the Roman Catholic Arch­dio­cese of Seat­tle) since 1988, and has pub­licly cham­pi­oned many pro­gres­sive caus­es from the pul­pit, includ­ing cli­mate action, immi­gra­tion reform, and gun respon­si­bil­i­ty. Every year, he posts his East­er homi­ly for the enjoy­ment of peo­ple around the world.