LIVE from Minneapolis: Netroots Nation 2012 to be in Providence, Rhode Island 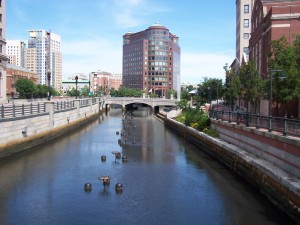 A snap­shot of the sights of down­town Prov­i­dence, the host city for Net­roots Nation (Pho­to: J. Stephen Conn/Reproduced under a Cre­ative Com­mons license)

Sen­a­tor Shel­don White­house has just tak­en the stage here in Min­neapo­lis to announce that the next Net­roots Nation will be held in Prov­i­dence, Rhode Island, from June 7th to June 10th.

We had guessed that the con­ven­tion would be in Prov­i­dence, main­ly because we already knew that orga­niz­ers want­ed to bring NN to Prov­i­dence last year. They end­ed up not being able to due to a labor dis­pute at the West­in Prov­i­dence, one of only a cou­ple of union­ized hotels in the city.

Con­se­quent­ly, this year, the con­ven­tion went to Minneapolis.

But the dis­pute between the hotel work­ers and the man­age­ment has since been resolved suc­cess­ful­ly, so next year, Net­roots Nation will be in Providence.